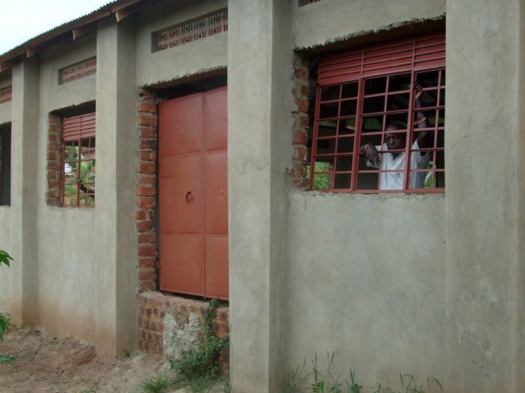 In early 2008, Kathy Ozzard Chism, at the time the Founder and Director of a global 501(c)(3) nonprofit, received an email from Mpagi Edward Edmary in East Africa.

Although a complete stranger, Kathy had what she calls a "heartpull" to his words. Edward talked of how he had been held in horrific conditions on Death Row in Uganda for nearly 20 years as an innocent man.

A successful farmer, Edward had been accused by another farmer of killing a man who was found alive seven years into Edward's sentence. When the man he supposedly killed went to the prison and begged the guards to release Edward, they refused, saying the release would make them look bad. Edward spent nearly 13 more years on Death Row until Amnesty International was able to release him.

Edward's dream the entire time in prison was to build a school and orphanage for the children of prisoners and AIDS orphans in his area of Kasenge, Uganga - an area that had never seen help from anyone in the history of Africa.  (There are no public schools in Uganda, so if a child is orphaned or a parent goes to prison, the children usually cannot afford school and wind up on the streets, often prostituting at 11, 12, 13 years old, to get money for food for themselves and their younger brothers and sisters.)

Upon his release, Edward, who Kathy has named "the Nelson Mandela of Uganda," immediately forgave everyone and began a long search to find someone to help him build his dream.  He learned to use the Internet, and eventually stumbled across Kathy via the British Consulate due to hurricane work she had previously done in the Bahamas.

Kathy mentioned her nonprofit was very, very small and building a school could take a long time.  Edward's response was that he had already been searching for someone to help him for four years... and that he was "a very patient man."  Yes, Edward, you certainly are.

With that, Kathy said yes.

After acquiring the land, they started by asking for donations for "Bricks of Love."  $10 U.S. bought 90 bricks. Little by little, brick by brick, the first building, what would ultimately become the "Wisdom Library and Event Center," took form.

Kathy sent Edward funds for a camera, and when this photo arrived, she burst into tears.  It is of Edward installing one of the window frames in the first new building - yet to her it represented all those years Edward dreamed his dream behind bars, and now he was standing inside his dream looking out.

Eventually Edward brought on his dear friend Katongole Ronald, a local accountant and the friend who had searched and searched until he found the man Edward had supposedly murdered, to manage all the day-to-day needs for the project.  Ron is tireless, truly amazing, as devoted to the children as Edward, and they are both adored by all who know them.

With children so eager to start school, classes began before floors were even finished.  Today, our school has the Wisdom Library, seven classroom buildings, a kitchen building, a teacher's building and storage house, separate lavatories for the boys and girls, a water well that services the entire community as well as the school, a medical clinic, organic gardens, a laundry facility, electricity to all buildings, and a massive security wall around the entire complex.

We also built an orphanage building that houses street children and children we rescue from abusive situations. 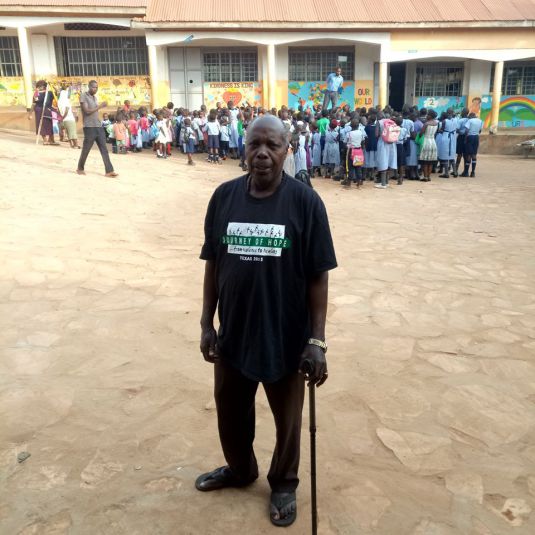 (Recent school photo of Edward, who suffered a stroke several years ago that paralyzed his left side.  Doctors gave him little hope of walking again, but he proved them wrong!  Truly a miracle man.)

That's what this school is - a complete labor of LOVE.  Love is building it, Love is working it, Love keeps it going and growing.

To see a slideshow with some of the building history, click HERE.

For a smile and heartpull of your own, watch the slideshow below... ♥♥♥